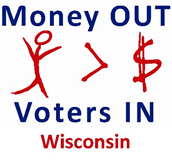 MADISON—On Tuesday, January 22, Rep. Lisa Subeck (D-Madison) and Sen. Dave Hansen (D-Green Bay) will be holding a press conference to unveil their resolutions that would give Wisconsinites a chance to weigh in on the role of big money in elections. The resolutions propose a statewide advisory referendum urging our elected officials to amend the U.S. Constitution to overturn Citizens United v. FEC and related Supreme Court rulings, and to declare that only flesh-and-blood human beings have constitutional rights.

The press conference will be at 10:00 a.m. in the Assembly Parlor of the State Capitol to mark the ninth anniversary of the Supreme Court’s Citizens United decision, which said that corporations and other groups, including unions and now SuperPACs, can spend unlimited amounts of money to influence who gets elected.

“Corporations and billionaires shouldn’t be able to buy our elections,” Rep. Subeck said.

“It’s time to let the voters be heard on this critical threat to our democracy,” Sen. Hansen said.

These resolutions are backed by the Money Out, Voters In–Wisconsin coalition, which consists of Blue Jean Nation, Citizen Action of Wisconsin, Common Cause in Wisconsin, NAACP of Madison, Our Wisconsin Revolution, the Wisconsin Democracy Campaign, Wisconsin Farmers Union, WisPIRG, United to Amend, and Wisconsin Voices.

To date, a total of 144 communities in Wisconsin have passed local referendums or resolutions in favor of amending the U.S. Constitution to make clear that corporations aren’t persons and money isn’t speech. And 19 states have already called for such a constitutional amendment.

The Money Out, Voters In Coalition, recognizing that Martin Luther King Day and the anniversary of the Citizens United decision fell on the same day this year, underscored that campaign finance reform is a civil rights issue.

“Poor people and people of color are underrepresented in the donor ranks, and as a result, our elected officials are not as responsive to them,” says Matt Rothschild, the executive director of the Wisconsin Democracy Campaign. “This has got to change.”

As Dr. King himself said: “Property is intended to serve life, and no matter how much we surround it with rights and respect, it has no personal being. . . . It is not man.

How do we stop America's decline? The country is in trouble and we can all feel it. Where did we go wrong? How do we fix it? We now have an auction-based government, for sale to the highest bidder. Politicians have become nothing more than corporate whores and pawns for the rich. If we want our representatives to represent us, let them get their campaign money from us, their constituents. We have to amend the constitution to get the big money out of politics.
View all posts by James Crist →